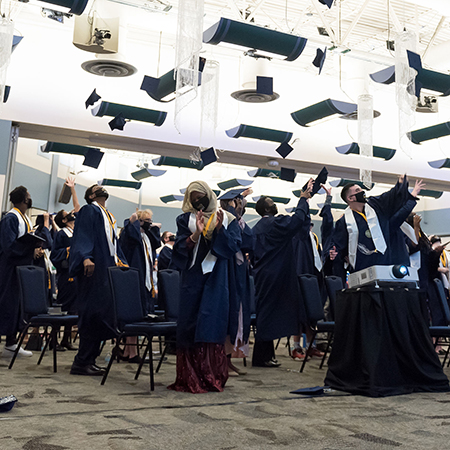 SEATTLE – This week, Summit Atlas, a public charter middle and high school in West Seattle, Washington that opened in 2017, is celebrating its first graduating class at 6 p.m. Thursday, June 10. Atlas is one of 14 schools nationally in the high-performing Summit Public Schools (Summit) network, and one of three Summit schools in Washington state. Ninety-one% of the graduating students were accepted to 40 colleges and universities, including Whitman College, Smith College, two Historically Black Colleges and Universities, and Washington State University.

“We could not be more proud of our first senior class for their resilience and accomplishments in the face of many unforeseen challenges. As a founding class, this outstanding group of young people helped create a strong school culture that will live on for future Atlas Orcas. The legacy of community and collaboration they are leaving behind is remarkable,” says Atlas Executive Director Dan Effland. “We wish them continued success and joy in their next steps, and can’t wait to see the ways they influence our community and society in the years ahead.”

The 33 students in Atlas’ inaugural graduating class founded numerous clubs, modeled peer-to-peer support and tutoring, and established cherished traditions, like the student shout-out portion of our weekly All School Meeting.

Among Atlas’ graduating students is Esther Mercelle Mumbi, who shaped the Atlas community as the founder and president of the Black Student Union and as a member of the virtual prom committee. Next year, Mumbi will attend the University of Washington, Seattle. A first-generation college student, Mumbi plans to become a healthcare professional.

Moved to action by the socioeconomic and healthcare disparities she has witnessed both in her hometown in Kenya and in West Seattle, Mumbi said, “I want to use my college education and future career to tackle these issues first hand. Our Regional Director of College Readiness, Mr. Dacuan, even helped me get in touch with a pediatrician who I shadowed in order to get a better understanding of my field of interest.”

As a student leader, Foster reflected on her growth during her time at Summit Atlas, sharing “everything about my experience at Atlas has surprised me. I have straight A’s, and I used to think I was terrible at school. Now, I’m helping support my friends and my community succeed academically. Knowing that somebody cares is so impactful. That’s community,” she stated, “that’s what Atlas teaches — to be in community.”

In the fall, Foster will begin her post-secondary studies at California Lutheran University, where she will be majoring in business administration. After college, she dreams of starting a music or fashion nonprofit that works alongside communities in need of support to make a positive impact.

Summit schools embrace the fact that every student is unique and learns differently. Through self-directed learning and the support of a one-to-one mentor, Summit students practice the skills that set them up for success in college and beyond.

About Summit Public Schools
Summit Public Schools is a leading public school system that prepares a diverse student population for success in a four-year college and to be thoughtful, contributing members of society. It operates 14 public college-prep schools that serve diverse communities throughout California and Washington. Summit schools are consistently ranked among the best in the nation. All Summit graduates are prepared for college and complete college at double the national average. To learn more, please visit www.summit-public-schools.local.