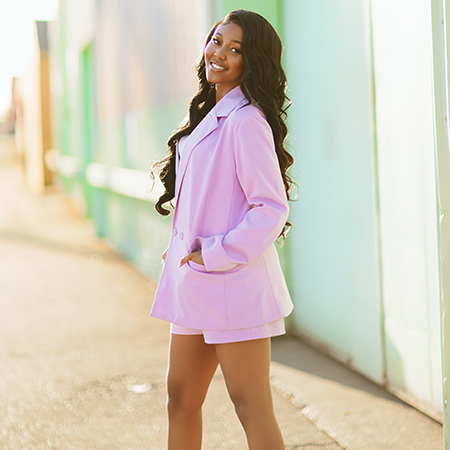 While COVID-19 brought an unexpected change to her senior year, Summit Atlas senior Esther Mumbi took the shift to virtual school in stride. In fact, this last year has only strengthened Esther’s drive to enter the healthcare field and work towards ending what she recognizes as another pandemic — social and economic inequality. Next year, she will attend the University of Washington, Seattle as a first-generation college student preparing to become a healthcare professional.

Originally from Kenya, Esther moved to North Carolina before making Seattle home. With a global mindset and deep sense of compassion, Esther is driven to provide better healthcare access and resources to low-income communities and believes her college education will help her tackle these systemic issues.

“I think social and economic inequalities are the biggest pandemic in the world. I have gotten to see shocking similarities between poverty-stricken communities in Kenya and the homeless population in Seattle as they struggle for basic healthcare needs,” Esther says as she reflects on her purpose and passion in life. “It is not going to be easy, but we need to start thinking about solutions to these global challenges. I want to be part of an effective change that leaves a legacy on people.”

Before becoming a senior with a clear sense of purpose and confidence in her next step, Esther describes herself as a shy ninth-grader. She was drawn to Summit Atlas, a new public charter school at the time, in part because she resonated with its core values of Compassion, Respect, and Integrity. Seeing these values embodied by the school community meant a lot throughout her school journey. One thing that struck Esther about Atlas was that all the teachers knew her — and every student — by name. Teachers there helped students engage with each other and leave their shells. Esther herself became bolder in the supportive environment that she found in Atlas.

Esther has found independence and confidence within Summit Atlas’ self-directed learning model. With a broad community of support and a dedicated one-to-one mentor throughout high school, she has been able to take charge of her educational journey, explore her love of science, and achieve her dream of being accepted to college.

As a junior, Esther attended a Black College Exposition and learned about the opportunity to shadow medical professionals. She immediately reached out to Summit Atlas’ Regional Director of College Readiness, Dustin Dacuan, who supported her in earning a spot shadowing a pediatric neurologist at Seattle Children’s Hospital. “I had a conversation with Mr. Dacuan in the summer,” Esther recalls. “He is the one who helped connect me to a pediatrician he knew. That was huge for me because I did not know how to make it happen. I’m grateful for that.”

After her experience at Seattle Children’s Hospital and having witnessed the heightened medical needs of families in her community throughout the COVID-19 pandemic, Esther began her college search with the goal of working to affect positive change in the medical field. With a focus on preparing students for a concrete next step, Summit Atlas supported her every step of the way. “If it wasn’t for teacher support and the fact that they care for us so much, I don’t know how college applications would have gone,” Esther says. Beyond providing guidance in navigating the application process, Esther recognizes the social emotional support her mentor, Jose Perez, offered her. “A lot of people have been going through a hard time through the pandemic so having someone to talk to has been really helpful. Mentors check in every week with every student to find out how we’re doing and what our goals are.”

Esther’s visionary mindset was welcomed at Summit Atlas, where she had the opportunity to shape the school as a founding senior. With her value of global community at the forefront, she did just that. Esther founded and served as president of the Black Student Union (BSU), recognizing that even within a shared identity, there is a wide breadth of experiences and cultures. Her goal for the BSU was to give her peers a common space to be in community, open up to each other, and learn about the diversity within the African Diaspora. Says Esther, “It’s nice to sit down and get to know about people’s cultures. It was very important to me that people who want to learn about their identities get the chance to do that.”

As a soon-to-be Atlas alum, Esther has a few words of wisdom for future graduates:

Reflecting on her lived experiences and high school journey, Esther is pleasantly surprised by her unwavering motivation and drive. She feels as though she has evolved into a person that is happy, proactive, and self-directed. “I’m grateful for the good and the bad because I am who I am now. I know what I want to do and who I want to be.”

Summit Atlas is a middle and high school in West Seattle, Washington. As part of Summit Public Schools, a leading public school system, Atlas prepares a diverse student population for success in a four-year college and to be thoughtful, contributing members of society. Summit Atlas students build habits and life skills with project-based learning by collaborating on real-world challenges. Learn more or enroll your student.